The recovery of polyethylene terephthalate (PET) is generally performed by a solubilization method, and there is a commercial-scale recovery method, which includes dimethyl terephthalate (DMT) method and dual-2 by Teijin Fiber Corporation of Japan. - Hydroxyethyl terephthalate (BHET) method. Almost all of these methods use PET such as methanol or ethylene glycol (EG) for decomposition.

The DMT method is a method of performing glycolysis using ethylene glycol (EG), decomposing the recovered PET chips into BHET, adding methanol, performing methanol decomposition, and obtaining DMT. In the case of ethylene glycol decomposing PET, alkaline carbonate is added, and BHET is produced at a temperature lower than the boiling point of ethylene glycol, followed by separation and recovery. This crude BHET was further decomposed with methanol to produce crude DMT. After the crude DMT was crystallized, it was refined and distilled to obtain 99.99% of high-purity DMT.

This DMT process has been built at Teijin Fiber for DMT plants for bottle making, with an annual production capacity of 30,000 metric tons, and a factory for polyester fibers. In addition, a factory producing terephthalic acid (PTA) by hydrodecomposition with high-purity DMT has also been officially put into operation. It has a capacity of 62,000 metric tons per year and is a â€œBott to bottleâ€ factory.

The Chicken Kennel is Popular in Europe and Australia Market, The Chicken Kennel also named Poultry Metal Run and Metal Chicken Coop run,it have the advantage of simple assembly,corrosion resistance and suitable for outdoor use.and the Chicken Kennel can be customized to different size as your demand. 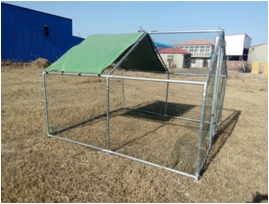 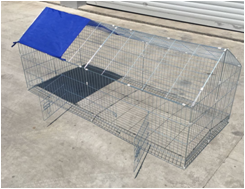